The National Museum of Qatar opened to the public March 28, 2019. This extraordinary building, designed by architect Jean Nouvel, contains nine ultra-large scale immersive art films projected onto gallery walls telling the story of Qatar from prehistoric times to the present day. Described by the New York Times (3/28/19) as "breathtaking...leaves most state-of-the-art museums in the shade... extraordinary inside and out...or, simply, astonishing."

It’s not “just” the scale of these films that make them so unique. The viewer typically stands less than 1/2 screen height away. This required the development of an entirely new visual language for framing, motion, storytelling and emotional connection to the viewer. In addition, such close proximity to these enormous screens demanded an unprecedented level of playback fidelity. As a result, viewers experience the art films as “a window into another reality” rather than a video projection.

The art films display 21.54 billion pixels per second across a total screen area of 34,271 square feet via 112 4K digital cinema projectors, 308 discreet audio channels and 173 bespoke media servers. The result is closer to an immersive virtual reality experience (without goggles) than to conventional cinema, unlike anything that currently exists anywhere in the world.

Shown above is the "Beginnings" film in gallery one. Additional pictures and information regarding the final installation will be posted shortly. In the meantime, please click the thumbnails below to view some of the full scale mock-up tests used in making the films.

What happened to the future we were promised?

How to promote a new artisanal spirit created by skydivers?

A warm, coming of age independent feature directed by Rob Meyer, "A Birder’s Guide To Everything” premiered at the 2013 Tribeca Film Festival. WCI’s Winkler was the film’s post production and visual effects supervisor. The clip below of CGI geese demonstrates that convincing visual effects in support of a story can be produced on a modest, indie film budget. The film is available on iTunes and Amazon.

WCI and accomplished producer Dan Lindau created Laboratory, the 21st century version of the film lab, designed specifically to bridge the gap between production and post production for commercials shot digitally. Laboratory provides management of files from capture to archive via an optimized digital workflow process. In 2014 Laboratory was acquired by New York City based Creative Services / Video Opticals.

“Workflow design” is just a buzz word for "thinking in flowcharts" which we describe as applying formal process engineering to production and post. This is a bedrock concept of all WCI services and something we’ve been committed to long before it was en vogue. Examples below include the 35mm / video tape based multi camera production and post for TV show “Spin City” (1996), a simple single camera Alexa production for indie film “Catataonk Blues,” a complex, high resolution stiched-camera production and

Comprehensive Test, Measurement and Pre-Visualization Through Mock-Ups and Simulation

The twin sister of process engineering is the rigorous test and measurement of results -- a second WCI bedrock principle. We provide a wide variety of these services including: image and sound quality control, ergonomic design prototyping, end-to-end signal flow proof of performance verification, video compression testing and full scale mock-up design and execution for creative and technical pre-visualization.

WCI's Winkler has been a pioneer in the use of mock-ups. Shown below are: an eye line study of control room ergonomics (1983 SMPTE paper), a before and after shot of a full scale mock-up used to design edit suites at Post Perfect and the mock-up created for the Doha Film Institute. 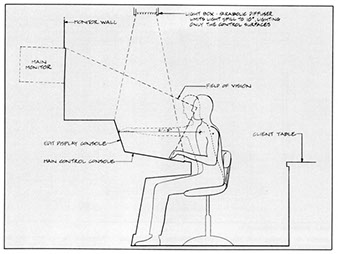