The 2018 Oscar-nominated films for best picture and best cinematography all had one thing in common: they were shot on film or with Arri Alexa cameras. Nary a RED to be seen. So why consider shooting RED vs. Alexa? The quick answer is for situations where resolution is more important than colorimetry shooting RED is currently the only option. The long answer:

As storage costs keep dropping and workflow speeds keep increasing, capturing and working with 8K images has become straightforward. A comparison of the open gate resolutions of the RED Weapon cameras (who chose that ridiculous name?) and the Arri Alexa cameras shows:

Even including the Alexa 65, which is still a rare and expensive machine, the Alexa series can’t match RED in terms of capture resolution.

What demands capturing at 8K — or higher — resolution? Site specific ultra-high resolution / multi screen installations. E.g., the art films for the new National Museum in Qatar that WCI has been working on with the Doha Film Institute. The final delivery of these films must be as high 24,576 x 4,320 pixels. A single RED camera obviously can’t achieve that. But as the body size of the Helium sensor RED cameras is relatively small we were able to combine three of them on a single head to increase our capture resolution, as shown in the pic below. 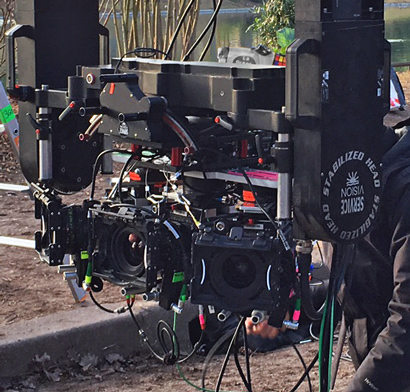 Movies and television shows can also benefit greatly from 8K capture. The ability to fine tune framing in post is an essential modern tool. As is being able to stabilize shots. Capturing at 8K and delivering at 4K allows both of those to happen with no loss of resolution in the delivery. High resolution has obvious benefits for all VFX work from simple green screen composites to complex CGI integration with live action. And working with files at higher resolution than final delivery resolution adds increased flexibility to most workflows.

It’s also worth noting the difference between resolution and sharpness. Using 8K files doesn’t necessarily mean showing every pore on an actor’s skin. Quite the opposite, many DPs use diffusion filters or softer lenses, e.g., the lovely new Cooke S7 primes, when capturing at 8K. This can achieve a more flattering look while keeping all the advantages of high resolution.

So why not just shoot RED? Because all that resolution comes at a very steep price in colorimetry and signal-to-noise ratio. While the RED 8K cameras offer exceptional resolution in a small footprint, they appear to trade off these two attributes:

Colorimetry: skin tones shot on REDs look washed out, pasty and just, well, unattractive. That’s great for a movie like “Winter’s Bone” but doesn’t work if people need to look warm and beautiful. And while one can work really hard in a digital intermediate color correction session to make people shot on RED look better, Alexa files seem to naturally start from a place where skin tones and people look good. That said, there is still no comparison to how beautiful people look when captured on film.

Signal-to-noise: Those little bits of metallic silver create something quite special in film grain. “Dunkirk” and “The Florida Project” are just two of many recent examples. By comparison, RED sensor noise is very digital and unattractive. Have yet to see any example where it supported the look of images or a story.

Any discussion of RED vs. Alexa would be incomplete without acknowledging that neither of them is as beautiful as shooting on motion picture film. Unlike projection or post production where digital is demonstrably better, as of today there is still no digital motion picture camera that equals the look of capturing on film. The gentle way film rolls off the brightest and darkest parts of an image, the magic of real film grain and the beauty of film colorimetry have still not been equaled digitally. But the cost difference between shooting on film vs. digitally is staggering. In round numbers, at 24 f.p.s. 16 hours of 35mm 4-perf film stock and processing is about $150K vs. $1K for 16 hours of RAID drive space for ArriRaw open gate footage. Yikes.

In summary, as of April 2018 WCI recommends that for applications demanding the highest resolution, shoot RED. For all other projects, e.g., where people need to look beautiful, shoot Alexa. Looking forward, I’m hoping Arri continues to increase the resolution of their Alexa cameras and RED improves the colorimetry and noise performance of their cameras.